At Bess Myerson’s Former Home, Shades of a Bronx Utopia

Bess Myerson in 1945. Ms. Myerson was once a resident of the Sholem Aleichem housing co-op in the Bronx. Credit Sam Myers/Associated Press

Everywhere Bess Myerson went growing up, people would stare. At 5 feet 10 inches tall she was already hard to miss, with a figure that was the definition of statuesque, capped by full cheeks and fuller eyebrows. Those looks would help her become Miss America in 1945.

Yet inside the gates of the Sholem Aleichem housing co-op in the Bronx, it was the talent portion of Ms. Myerson’s portfolio that had won over the neighbors she was raised with. “It was a bunch of Eastern European Jews, every one of them an artist or intellectual trapped by circumstances in a garment factory,” said Esther Nelson, a dancer and an author who grew up with Ms. Myerson and still lives in the three-building complex. “Nobody cared about looks. They cared about books and brains.”

Her entire life, Ms. Myerson bristled at the notion she was just another pretty face, an attitude that owed a lot to the idealism of her upbringing. “Everyone swooned,” Ms. Nelson said, “to hear her play the piano.”

With the death of Ms. Myerson last month, Sholem Aleichem lost not only its most famous onetime resident but also a link to its early history of Bronx utopian housing, quintessentially Jewish quarters that would help their settlers escape the shtetl once and for all. Even if the communitarianism has faded, and nearly all of its original families are long gone, almost 90 years on, the Sholem Aleichem houses remain a haven for working-class New Yorkers.

Almost 90 years on, the Bronx complex, remains a haven for working-class New Yorkers. 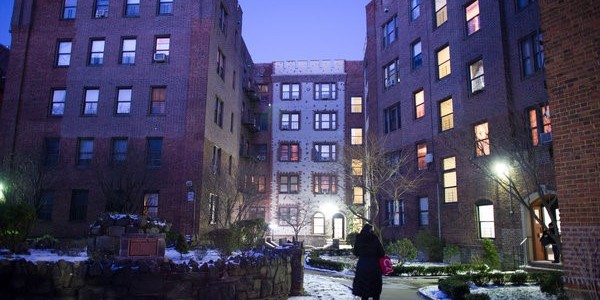 “These apartments are beautiful, unlike anything I imagined I could have”

“These apartments are beautiful, unlike anything I imagined I could have,” said Gloria Torres, a housing court officer who sold her home in the South Bronx 22 years ago so she could raise her son and daughter, and now granddaughter, in a better environment.

It was 1926 when the Myersons and Nelsons arrived on Sedgwick Avenue with hundreds of other Jewish families fleeing the squalor of the Lower East Side. They and the organizations they supported pooled money to establish co-ops, and they settled on hillocks, then still largely farmland, laid out by Frederick Law Olmsted just south of Van Cortlandt Park.

There were the Amalgamated Houses started by the garment workers union. The communists created the United Workers Cooperative Colony, or the Coops, while the Zionists built the Farband Houses.

The Sholem Aleichem Cooperative Houses were created by families affiliated with the Workmen’s Circle, for whom Yiddish culture trumped all other concerns. The property was named for the great Yiddish writer whose work inspired “Fiddler on the Roof.”

“Sholem Aleichem always seemed to be the most idealistic, even though all were obviously, but for the fact that its main driver was cultural, unlike labor solidarity at Amalgamated or political ideology at Coops,” said Richard Plunz, director of the Urban Design Lab at Columbia University and author of “A History of Housing in New York City,” which includes a chapter on the co-ops. 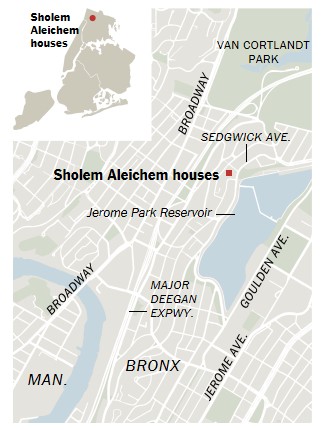 Still, so discordant were the politics of the place that the cooperators had to create two Jewish schools, one for the socialists and one for communists. These were housed inside the five-story, red-brick building’s stout stone foundations.

There was also a nursery school and, most important, an auditorium for lectures and recitals, along with three art studios. These were home to the sculptor Aaron Goodelman and the painter Abraham Manievich. It was there that Ms. Nelson once met Marc Chagall, who stayed for a few months after fleeing the Nazi invasion of Paris.

Ms. Nelson, 86, lived in Manhattan briefly, but moved back to Sholem Aleichem with her husband when the first of her two daughters was on the way, into a large three-bedroom. Of the 238 apartments, no two are alike, because the original cooperators were able to design their own space…