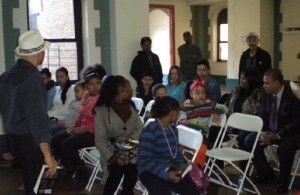 At Chestnut, we are committed to improving not only the buildings in which our tenants live, but also to helping affect positive change in the surrounding neighborhoods. We strive to build relationships and work in ways that will help build a brighter future for our tenants and the community. Supporting causes important to our tenants and the local New York community has always been, and continues to be, an integral part of our mission.

Most recently, we partnered with the DreamYard Project to bring the arts closer to home for children in the Bronx by offering free workshops for residents. These events allow students to create original works of art that will be displayed in our buildings. We also recently worked with the Bronx Council on the Arts (BCA) to sponsor two separate programs, the Bronx Story Team and the Bronx Reading Team, for neighborhood children. These programs provide interactive reading, storytelling and learning experiences to local children.  See below some of the programs that we have run in our communities and how we restored and beautified the surrounds of our tenants

Turkey’s for the Holidays

Chestnut Holdings employees held a first annual toy drive for local children in the community. The toy drive was a major success with all employees contributing to the toy collection. Many children benefited and were able to enjoy the holidays and their new gifts. The toys were handed out by District 16 Council Member, Vanessa Gibson to those children in need.

Chestnut and the Bronx Council on the Arts partnered to create The Bronx Reading Team. The free program was available for neighborhood children to participate in each weekend. The team meet in the lobby of a Chestnut building located at 2700 Grand Concourse to read and discuss The Hunger Games during the months of October and November.

Chestnut and the BCA also partnered to provide the Bronx Story Team program, which was held in the lobby of Chestnut’s building at 240 E. 175th Street. The team meet on Saturdays during the months of October and November to creatively share their experiences inside and outside of the Bronx through written and oral storytelling.

The following galleries give a glimpse at just some of the different activities and projects taking place at Chestnut buildings located throughout the city.

Chestnut Holdings and Dream Yard partnered in the annual Bronx Arts Festival. Over 1,000 Bronx Public School students were involved in the festival either through performances or the gallery show, and all events took place at Lehman College. This is the second year of Chestnut Holdings partnering with Dream Yard, and we were able to allow them to continue to support a partner school that they had a relationship with for almost a decade who was facing a dire budget crisis this year. Chestnut Holdings partnership allowed PS 33 the availability to continue the Dance classes as part of their curriculum. The students from this school (PS 33) are pictured as part of the June 2nd evening event. Chestnut Holdings looks forward to continuing to do what we can to improve the quality of life for all Bronx residents

Chestnut and Bronx is Blooming

Residents of the Bronx took part in Claremont Park Day as Chestnut Holdings partnered with The Bronx is Blooming and The NYC Department of Parks and Recreation to engage the community through environmental stewardship and educational activities. The event brought out close to 100 volunteers who enjoyed a great day of helping to beautify and restore Claremont Park. The New York Public Library also joined to encourage attendees to sign up and visit their local branches.

Students from P.S. 95 worked with DreamYard’s art instructors to create an art display that was unveiled in the lobby of Chestnut’s building at 1504 Sheridan Avenue. We held a ceremony for the culmination of the six-month project and discussed with the students how the art reflected people and images in the Bronx community that were memorable to them. The art will continue to hang in the building lobby for all residents to enjoy.

During a recent art workshop, DreamYard instructors worked with Chestnut residents to create screen prints. The free workshop was held in the lobby of Chestnut’s building at 1504 Sheridan Avenue, and each participant left with his or her own masterpiece!

In 2013 Chestnut acquired the Shalom Aleichem Houses, three distressed properties made up of 15 buildings, in Van Cortland Village in the Bronx. This gallery provides a glimpse of the beautifully renovated complex in recent months during both the Fall and Winter seasons.

Chestnut and the Bronx Council on the Arts partnered to create The Bronx Reading Team. The free program was available to neighborhood children who met in the lobby of a Chestnut building during the Fall to read and discuss The Hunger Games.

Chestnut and the BCA also partnered to establish the Bronx Story Team program. The team met on Saturdays in the lobby of a Chestnut building to share their experiences inside and outside of the Bronx with creative written and oral storytelling.

This gallery includes images from the lobby renovation at The Snowbell, a Chestnut building located at 240 East 175th Street in the Bronx. The renovations included a new lobby floor as well as the installation of beautifully detailed ceiling medallions.

Chestnut has owned The Sargent Cherry, located at 1115 Jerome Avenue in the Bronx, since 2005. Recently, the Chestnut team gave the building lobby a fresh look with new paint, floors, and decorations on the ceiling and walls!

Chestnut encourages and supports reading and education opportunities for all tenants, and has provided young tenants with gift cards to purchase books and other learning materials through its Reading Matters program.